I was half through my Out West Packing List, when I got a call from my fishing buddy Bob_K. “Steve, I blew out my back and I’m in bed resting” (my heart sank), and then Bob said “The good news is that I got most of my packing done and I’m bound and determined to go. Even if I have to go to the doctor and get a shot in the A**, I’m going.” Well I did not know what to think after that phone call, so I just kept packing and hoped that he would be able to make it some how.
When I got to Bob’s house I could see that he was in pain and was having a hard time walking, but he still wanted to go. So Bob’s wife and son help me load his gear into the truck. His wife told me that “If he doesn’t get any better just take him out back and shoot him!” I told her that “Good fishing buddies are too hard to find and I couldn’t do that”.

We headed to Ft. Smith Montana and made it in a little over 17 hours and Bob was still alive and kicking. He was moving so slowly that I started to call him Gimp Junior. Bob said “No I’m older than Gimp so you’ll have to call me Gimp II.” We got the camper set up and got in a little shut eye, but it was not easy because it was over 100F in the shade! We did try and fish that evening but I was just to road weary and to hot to set the hook in time. That evening a big Montana wind came up and the weather cooled off to a more comfortable level. 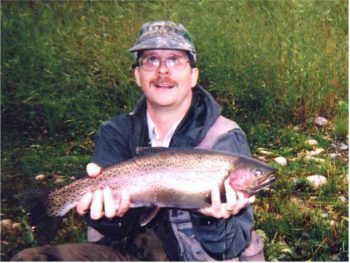 We hired a guide for the first full day because I found out from the year before that the fishing could be really challenging. And if you don’t know where the fish are holding and what they are hitting, you’re not going to catch many fish. We got Gimp II loaded in the boat and we got away from the boat launch. The guide was setting up our rods the way he wanted them. Well, as luck would have it he did my rod first, and I started to fish while he set up Gimp II’s rod. On about my 3rd or 4th cast I hooked up with a nice fish, I didn’t think it was a big fish until it got a look at the boat then it make a big run. After a good battle with this big fish, we where able to net it. You know it must be a big fish when the guide wants to have his picture taken with it. It turn out to be a nice big fat rainbow about 23” long and almost that big around. As it turned out, that was the biggest fish of the trip. I would have never guessed that the first fish I catch would be the biggest! 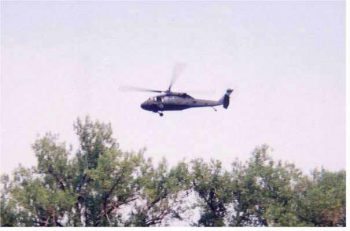 Somewhere along the way, our guide said Dick Chaney was going to be fishing here the next day. We did not give it much though at the time, I knew that he like to hunt elk but did not know that he liked to fly fish. A little while later a drift boat came down the river with a guy in the bow. He had no fishing gear and all he did was stand there look though a rather large pair of binoculars. Later there where white Chevy Suburbans with dark windows driving up and down the riverbanks. I don’t know if may of you have fished the Big Horn, but you usually don’t see many cars or trucks while fishing there. Then the real noise started when three blackhawk helicopters start flying around the area, then they came right over the top of us, they must not have been more then 200 feet off the ground and moving slowly and looking every thing over. Our guide noticed that the helicopters did not have any tail numbers or any markings of any kind on them. He said that that would make them Secrets Service helicopters for sure. We found out that Dick Chaney was staying at the Orvis lodge, but any one could have figured that out by driving by. There were white vans blocking all the driveways to the lodge and the guy behind the wheels even looked like SS guys, dark sunglass, shaved heads, and sports coats. All I could think about was if they do this much for the Vice President what do they do for the President? 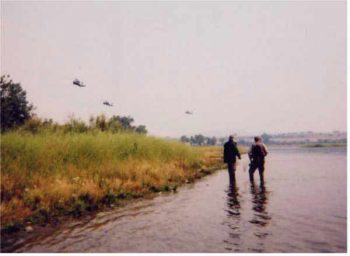 Well as luck would have it we did not fish the same section of the river the next two days a Dick Chaney did. So we only got buzzed buy the Blackhawks once or twice a day. But the Suburbans where still driving around, along with the State Patrol and Sheriff, but they did not get in the way of our fishing much, just the noise from the helicopters was annoying. Gimp II was doing better, so well that he was able to row his own pontoon boat and catch fish at the same time for the next two days. I was able to land 4-5 bows between 20-21 inches and I lost many other large fish. I learn that if you played them like a steelhead you had a better chance of landing them. I did find that it was more enjoyable to catch 18-19” bows because they jump out of the water as soon as you hooked them then they would put up a bigger fight. I came close to getting in to my backing more then once on an 18 incher, but never on a fish bigger the 20”. Later we heard that Dick Chaney only hooked 7 fish on first day and only landed one! Hee Hee. 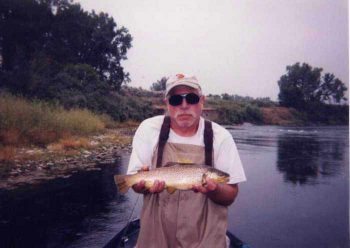 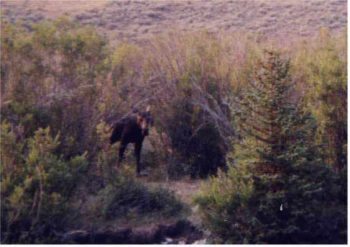 On the fourth day we packed up the camper and headed for the mountains. We re-set up camp at the Bear lodge at Burgess Junction, WY. Then headed for the Tongue River that afternoon and had a good time catching beautifully cutthroats. Bob had a great day landing many fish and landing a few Cuts that went over 16”. I on the other hand had one of those days where nothing when right, losing flies, stepping on my fly line and just a general screwed up day. I was sitting on the bank near the end of the day fixing one of my BIG wind knots when I hear a very loud “snort”. Now this is open range so I was thinking that I have never heard a cow snort that loud before. So I did not give much more thought until I went around the bend of the river and came face to face with a Moose! Now this startled me a bit because the only thing the guy in the fly shop said to worry about was a cow moose with a calf. With a quick look around I saw that there was no calf with this moose and I took a few steps back and snapped a picture and then got away from her. 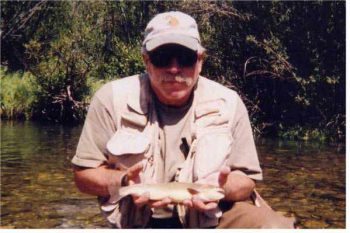 The fifth day we headed to where the North and South fork of the Tongue come together. This was a bit of a hike down the side of the mountain but it was well worth it. It took us about 30 minutes to get down to the bottom but once we got there we were rewarded with many eager trout. I was able to shake off the gremlins from the day before and catch about 60 trout. I was able to find some great pocket water, and had a blast catching these gems in the crystal clear water. I really enjoy fishing pocket water, it’s so neat to cast from pool to pool up the side of the mountain. It’s what I see in my minds eye when I read some of John Gierach’s books.
On the last day we headed back to the same section of the Tongue that gave me such fits on the fourth day. I was dialed-in this day and had a great time catching cut after cut. I wound up catching four cuts over 17”. What a great way to finish off a great trip.